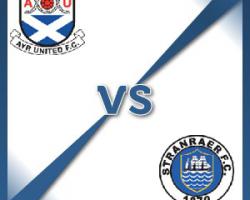 Ayr V Stranraer - view commentary, squad, and statistics of the game live.Slane out for AyrManagerless Ayr will be without the suspended Paul Slane against league leaders Stranraer.Temporary boss Andy Millen is also missing Martyn Campbell (knee) and Peter Murphy (back).Millen is looking for an improvement from the Honest Men following their 3-0 defeat from Airdrie last weekend.He said: "We could complain about injuries and being short of bodies but that will not help us on the park

What we need to do is to cut out the errors that we are making."We gave away goals cheaply at Airdrie and we have to ensure that teams start working really hard to score against us."Stranraer hope to have winger Willie Gibson available after more than a month out with a calf injury.Scott Robertson and Sam McCloskey are both over recent knocks but a lack of recent game time will see them miss out.The Blues lost for the first time in four months when they went down 2-0 to Stenhousemuir last Saturday.Manager Stephen Aitken said: "It was just one of those days

We moved on quickly and are preparing for a really tough game at Ayr against a group of players who will be out to impress any new manager who could be watching."