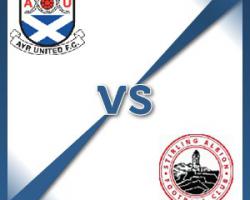 Ayr V Stirling - view commentary, squad, and statistics of the game live.Options available for Millen Ayr will have Andy Millen in charge against bottom-of-the-table Stirling at Somerset Park.Millen, in control of first-team affairs following the dismissal this week of Mark Roberts, has a full squad available for Saturday's game.He said: "The start of the week was difficult but we have to look to move things along now

It is a good group of players here that know that they have under-achieved and a good way to start putting that right is by winning this game."The squad are short on confidence after poor results, however the best way to get that back is to work hard and win games

Hopefully that will start against Stirling."Stirling released skipper Darren Smith this week after he fell out of favour.Albion will also be without Darren Lee Smith due to a knee injury while Lewis Coult remains absent because of a ankle problem.Assistant manager Martyn Corrigan is looking for his side to build on a solid performance against leaders Forfar last weekend, as he explained: "We matched the best team in the league at the moment for long periods and that is very encouraging."Ayr players may feel that they have a point to prove and Andy Millen will have them well prepared so we need to play at a high level again to win."