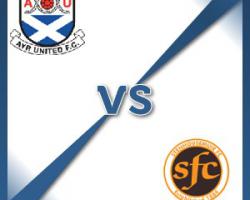 Ayr V Stenhousemuir - view commentary, squad, and statistics of the game live.Double boost for UnitedAyr add the fit again Martyn Campbell and Alan Forrest to their squad as they look to defeat visitors Stenhousemuir and climb above the Warriors in the table.However, Adam Blakeman will be missing for Ian McCall's men after being sent off in the 1-0 defeat to Airdrie in midweek.McCall said: "I thought Adam was unlucky to be dismissed and I thought we were unlucky to lose

If we can play to the same level again but keep 11 players on the pitch then I am sure that we will do well against Stenhousemuir."They will be confident after a couple of wins but this is a game that we can win."Stenhousemuir, who have defeated Stranraer and Peterhead in their last two games, will be without Bryan Hodge (calf).Interim manager Brown Ferguson said: "We have won games recently as we have been playing to a higher standard and our game management has become a lot better."We are handling issues that arise in games much better now and it has been a positive period with six points from six and a jump over Ayr."However, nothing has been achieved and we will need to dig deep as Ayr will see this game as an opportunity to put us back down into the bottom two."