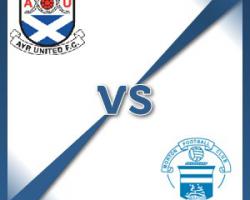 Ayr V Morton - view commentary, squad, and statistics of the game live.Murray set for Ayr startIan McCall will take charge of Ayr for the first time at home when Morton visit Somerset Park.McCall has brought in Craig Murray on loan from Aberdeen and he is set to play from the start

However, missing for the Honest Men will be Martyn Campbell (groin), Peter Murphy (back) and Craig Beattie (knee).McCall is looking to build confidence in his squad, he said; "At Brechin last weekend the players put in a lot of effort but there is an obvious lack of confidence, which is not a surprise as there has been a bad run of results."Hopefully the fans will come out and back us as they have a crucial part to play in turning things around."Morton manager Jim Duffy continued re-vamping his squad this week with striker Andrew Barrowman joining Dunfermline and midfielder Ross Forbes making a move in the opposite direction.The Greenock side are again without injured goalkeepers Derek Gaston (thigh) and Nico Caraux (groin) while Jon Scullion is absent with a knee injury.Ahead of the game, Duffy said: "It was a good win at Stenhousemuir last weekend but it was the second away game running where we only started playing at our best after we went behind."We need to ensure that we take command of games better, especially this one as Ayr's new boss Ian McCall will have them extremely fired up."