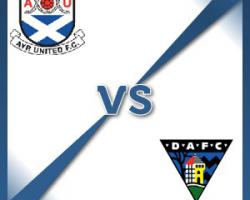 Ayr V Dunfermline - view commentary, squad, and statistics of the game live.Ayr pair miss Pars clashAyr manager Ian McCall will be without Martyn Campbell (knee) and Peter Murphy (back) when Dunfermline visit Somerset Park.Paul Slane is also an injury doubt as McCall looks to build on two draws in his side's last two games.McCall said: "I would class it as steady progress and coming from behind last week to get a draw at Stenhousemuir has started confidence growing in the squad

We played good football and kept possession well but a cutting edge was lacking."Hopefully we can show one against Dunfermline, who will be determined to get a win and end a disappointing run of results."Dunfermline, who have slipped to fifth place and 10 points behind leaders Stranraer, will add defender Gregor Buchanan to their pool after he served a suspension in last Saturday's 2-0 defeat to Morton.Ryan Williamson misses out again with a knee injury and Ryan Wallace is also doubtful.Manager John Potter said: "We have had a good record against Ayr in recent seasons but we know that they have taken a lift from Ian McCall going in there."We have won for a few games, but there are still a lot of points to play for in this league

We will be looking to pick three of them up at Somerset Park."