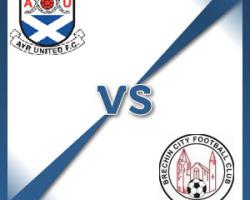 Ayr V Brechin - view commentary, squad, and statistics of the game live.Blakeman back to face BrechinAyr will have Adam Blakeman back to face Brechin at Somerset Park after a two-game ban.Alan Forrest and Craig Beattie are also available to manager Ian McCall after injury.On-loan Aberdeen defender Scott McKenna misses out as he is skippering Scotland's Under-19 side in a UEFA Tournament in Vienna and McCall said: "We have been playing well in our recent games but not picking up the points we should be, and losing points late on at Morton last weekend was really disappointing."We've still not managed to move away from ninth place so it really is time to start getting the points that we deserve."Brechin will be without the suspended Colin Hamilton and Bobby Barr, with Alan Trouten missing with a rib injury and Craig Storie also on Scotland Under-19 duty.Manager Ray McKinnon is hoping Darren McCormack and Paul McLean can overcome knocks sustained in Tuesday night's 2-2 draw with Peterhead to avoid being half-a-dozen players down.McKinnon said: "Ayr played really well at Morton last weekend before losing two late goals and going down 2-1

That result may make them even more dangerous opponents as they will be determined to win back the points that they feel they lost."